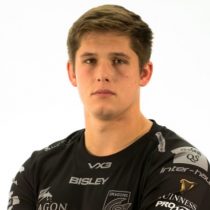 A hard-running and powerful centre – who stands 6ft 2in tall and weighs 102kg –Tom Griffiths is English born Welsh-qualified, through his father, back who started his career at Hartpury RFC.

Originally from Gloucester, Griffiths was part of Hartpury RFC in winning their fourth AASE title back in April 2013. It led to call ups to both England U18s and to England U20s where he competed in the 2014 Six Nations Under 20s Championship.

He became part of Saracens academy squad back in 2015 where he was dual-registered to Bedford Blues in the RFU Championship for both the 2015-16 and 2016-17 season.

He stepped up into the Saracens senior squad in 2017 after he signed his first professional contract with Saracens, thus promoted to the senior squad from the 2017-18 season.

Griffiths made his debut in the English Premiership in the 2018/19 season and helped Saracens Storm win the Premiership Rugby Shield.

The exciting young centre joined Dragons from Saracens in the summer of 2019 and made 6 appearances by June 2020 making appearances in the PRO14 and Challenge Cup.