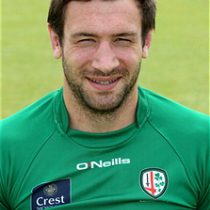 The experienced loose forward has had success with the England sevens and England Saxons teams while notching up more than 200 appearances for the Harlequins after 12 seasons and European Rugby Challenge Cup, Aviva Premiership and LV= Cup titles.

While he is able to play across the back row, he is most suited to No.8. Guest moved onto pastures new by signing for London Irish for the 2014/15 season where he scored 3 tries during his 30 appearances for the club.

In May 2016 Guest announced his retirement from professional rugby.