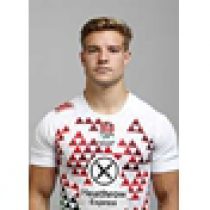 Tom scored five tries and 57 points in England's run to the 2012 Glasgow final with 26 more in London to take his total last season to 150. Tom then signed a full-time Sevens contract and has since taken his try tally to 36 and points to 340. Born in Cuckfield, he is a product of Worth School in West Sussex and obtained a BA in English and Philosophy at Bristol University before going to Oxford.

At 15-a-side, he can play at centre and full back as well as fly half and he led England Students in their 29-25 defeat by the Portugal national side in Lisbon.

Mitchell was the top points-scorer at the 2013/14 HSBC Sevens World Series, amassing 358 in his impressive season.

His other accolades include helping England to reach the 2013 RWC Sevens final in Moscow, to take third place at the Gold Coast tournament in October 2013 and fourth place in Dubai the following month.

In May 2016, he was included in the Great Britain squad for the Olympic Games in Rio de Janeiro.