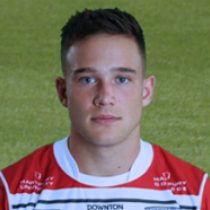 Born in Essex and educated at Wycliffe College, Seabrook captained his school team and scored tries in his first two England U18 games against France and Scotland in 2017 and was also a member of the U18 squad that toured South Africa in August 2017.

He made his debut in Gloucester's 62-12 loss to Saracens on 5 May 2018, scoring the fastest try in Premiership Rugby, within 58 seconds.

Represented England U20s in the Six Nations and has now been promoted from the Academy to the first team squad.