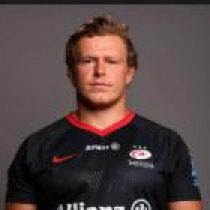 A World Rugby U20 Championship winner with England in 2014, Tom launched his career at Bath Rugby where he came through the academy ranks under the watchful eye of former England lock Danny Grewcock.

Making the transition from back row to hooker following advice from Grewcock, Woolstencroft made his senior debut for Bath in the LV= Cup in 2014.

The versatile forward was also part of the club’s Premiership Rugby A League-winning side the same year, underlining his growing potential in the game.

Wasps’ director of rugby Dai Young came calling for his services ahead of the 2016/17 season, but injury curtailed his time at the Ricoh Arena, with Woolstencroft training with Ealing Trailfinders last season in a bid to get himself fully match fit.

In October 2017, London Irish bolstered their front row options with the signing of the former England Under-20 hooker.

After making 13 appearances in all competitions for the Irish, Woolstencroft signed for Saracens ahead of the 2018/19 Premiership Rugby campaign.

Not only did Tom experience Champions Cup rugby for the first time after signing for Sarries but contributed hugely to the triumphant club's campaign, coming off the bench in the Twickenham showpiece.

After featuring 34 times in a Sarries jersey, he signed a new two-year deal with the North London club until at least 2022.