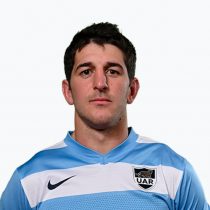 Cubelli may be considered "small" in the game but he makes up for it in skill. A dynamic player with a great passing range, he has been involved with Argentina from U19 level right up to the senior side.

In 2014, he was called up to the Rugby Championship squad.

Having also competed at the 2015 Rugby World Cup, Cubelli signed for the Brumbies in 2016, making 15 appearances and scoring 15 points.

Cubelli missed the majority of the 2017 Super Rugby season due to a serious knee injury, having only played 2 games as the Brumbies went into the Super Rugby play-offs.

In July 2017, the scrum-half agreed a two-year contract with the Argentina Rugby Union and the Jaguares.

After 18 appearances and scoring 15 points, he left the Brumbies for his native Argentina, signing a contract with Jaguares in 2018.

As of June 2020, Cubelli has made 75 international appearances and has scored 60 points for Argentina.

Following the Jaguares exit from Super Rugby he signed on to play for the Western Force.