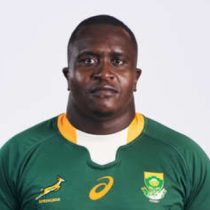 A classic modern-day front-rower with his physicality and mobility being some of his strongest attributes but what sets Nykane part from the rest is the fact that he can comfortably play loosehead and tighthead prop.

His professional career started with the Cheetahs in both Super Rugby and the Currie Cup before he moved to the Bulls in 2014.

In June 2013 he made his test debut for the Springboks against Italy in Durban. He came on from the bench in the 73rd minute as a loosehead-prop replacement for Tendai Mtawarira.

Since making his debut in 2012, Nyakane has gone on to feature in over 90 Super Rugby matches and brought up his century in 2019.

The versatile front row claimed a place in the Springboks squad for the 2019 Rugby World Cup. However, he had to withdraw through injury in the pool stage and was replaced by Thomas du Toit. South Africa went on to win the tournament, defeating England in the final.

Nyakane was named te Bulls vice-captain for the 2020 Super Rugby season. Nyakane won the Super Rugby Unlocked and Currie Cup with the Bulls in 2020 also helping the side to the Rainbow Cup Final.

June 2021 saw him being named in South Africa's 46-man squad for the British and Irish Lions Tour. He turned out for South Africa A team who managed a 17-13 victory over Warren Gatland's charges.

Nyakane started the first test against the Lions at tighthead before switching to loosehead and featuring from the bench in the other two tests. He was a regular for the Springboks throughout 2021 making his 50th appearance for the Springboks against New Zealand in the 100th test between the two countries.

After 82 caps for the Bulls over a six-year period, Nyakane made the move to France joining Racing 92 in December 2021. Racing reportedly bought Nyakane out of the final two years of his contract and joins the French club until the 2023 Rugby World Cup.