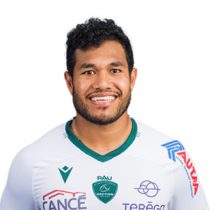 College Rifles centre Tumua Manu made his mark on New Zealand rugby after being selected in the Auckland 2017 Mitre 10 Cup squad.

Manu was selected for the Blues Super Rugby squad in April 2018 as Tana Umaga called up the Auckland player.

He made 4 appearances during the 2018 season before helping Auckland win the Mitre 10 Cup.

Manu made the switch to the Chiefs for 2019, where he made his debut against the Highlanders. Manu was named for the Chiefs squad ahead of the 2020 Super Rugby squad.

He has obtained 20 caps so far and will be looking to extend this.

His hard work on and off the field saw him cement himself as a regular starter for the Chiefs as he took his cap tally with the side to 24 before signing a two-year deal to join Pau in France.

Manu will join Pau once he completes the 2020 Mitre 10 Cup season with Auckland.