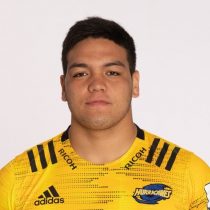 The family of Tyrone Thompson must feel like his presence at Marist St Pats is a case of things going ‘full circle.’

Tyrone’s father is from the Hawke’s Bay and attended Gisborne Boys’ High School. In 1988, Jud Thompson was a member of the First XV who defeated Napier Boys’ High School in the National Top Four final, erasing a large deficit.

Fast forward 30 years and Tyrone was in the Napier First XV who succumbed to St Peter’s College, Auckland in similar circumstances. Tyrone and twin brother Leo have since ventured to the capital - a repeat of dad’s movements.

Thompson became a regular for the Wellington u19s and the dynamic hooker was also selected for the New Zealand Secondary Schools.

The hooker has also been involved with the Hurricanes u20s and was included in Wellington's 2020 Mitre 10 Cup season.