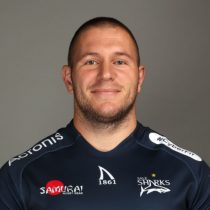 Born in Moscow, Russia, Morozov tried his hand in volleyball before had to quit the sport due to his height not being enough for a professional career.

He traded volleyball with rugby at age 14 when he represented his hometown club Zelenograd before signing a three-year deal with Enisei-STM.

He made his international debut for Russia in 2016, with his displays securing him a contract with the Sale Sharks in 2018.

Morozov has 15 Russian caps, and last played for his country alongside Andrei Ostrikov against Japan in November 2019.