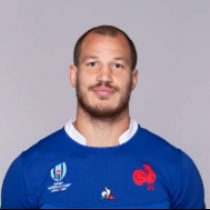 Lauret first arose on the professional scene during the 2007–08 Top 14 season for Biarritz Olympique.

In May 2010, he was selected for the France National side to tour South Africa and Argentina, making his debut on 12 June in a loss to South Africa.

During that year, he was selected for the France U20's side to play in the inaugural IRB Junior World Championship in Wales. He amassed over 80 appearances for Biarritz before signing for Racing 92 at the end of the 2012/13 Top 14 season. He was a member of the 2016 Top 14 winning squad.

In January 2018, he was included in France's squad for the 2018 Six Nations tournament, where he played in all 5 of France's matches taking his test cap tally to add to his 17 caps.

Lauret, named for the 2019 Six Nations squad has had 12 previous 6 Nations appearances. He has yet to score any points.