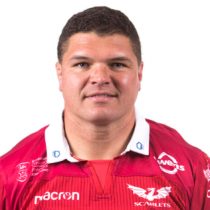 Werner is a seasoned tight-head prop for the Scarlets and is a big reason why their tight five is so revered.

His set-piece is his major strength, earning him a call-up to the Springbok squad on a number of occasions.

Kruger played for the Springboks four times during the 2011-12 season.

More mobile than he seems, Kruger is an asset around the park and in the scrums.

After making 116 Super Rugby appearances, Kruger signed a three-year deal with PRO12 side, Scarlets in February 2016.

During his time with the Bulls, Kruger became the first player to play 100 Currie Cup and Super Rugby games for the Union.

Having been at Llanelli since arriving from Super Rugby side the Bulls in 2016, Kruger signed a new deal with the Scarlets in April 2019.