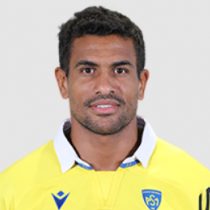 Blessed with dazzling footwork, speed, and an all round skillset to match, Wesley Fofana had all the attributes to be an all-time great for Les Bleus.

Injuries hampered Fofana's career having started the Paris Universite Club before moving to Clermont in 2008. His unfathomable ability to penetrate top class defensive lines is jaw-dropping.

Fofana made his test debut against Italy in 2012 having shone with Clermont in his debut season with the senior squad.

The talented center featured in the 2015 Rugby World Cup for France. Fofana was part of the Clermont sides that finished as runners up in the Champions Cup in 2013, 2015 and 2017.

Fofana later announced that he would retire from international duty at the end of the 2019 Rugby World Cup but a thigh injury cut his international career short as he was ruled out of the France squad. He played 48 times for France.

Fofana is contracted to Clermont until the end of the 2022/23 season and heads into the 2021/22 season with over 100 appearances for Clermont.

In July 2022, Fofana announced his retirement from rugby with a total of 207 appearances for Clermont and 48 for France.