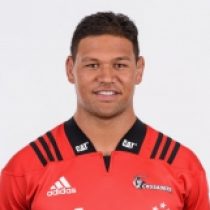 His performances with the University side did not go unnoticed as he was called into the Waikato senior side and represented the Province in the ITM Cup and Mitre 10 Cup competitions between 2013 and 2016 making a total of 36 appearances.

During that time he trained with the Chiefs and the Maori All Blacks.

Douglas was named in the Maori All Blacks squad for the first time in 2016, for their end of year tour to Chicago, London and Ireland.

His real break through came when he made the switch to Canterbury for the 2017 Super Rugby season when he filled in for Kieran Read during his enforced rest from wrist surgery.

The powerful loosie was an instant hit with the Crusaders coaching staff and fans in the 6 appearances he made for the club.

Douglas had signed a one-year deal with Italian side Treviso which would see him depart for Italy during the 2017 Super Rugby season.

He decided to honor his contract, despite the Crusaders best efforts to persuade him to stay in Canterbury.

Douglas made a similar start to his Pro14 career with Treviso and went on to make 11 appearances in the competition and played 2 games in the Champions Cup.

The Crusaders finally got their man following the conclusion of the 2017/18 season when Douglas signed a two-year deal with the Super Rugby side as well as Canterbury in the Mitre 10 Cup.