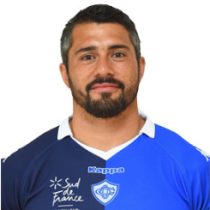 Son of French Javelin thrower Monika Fiafialoto, David started his senior professional career for Bourgoin in France. His preferred position is centre but he is able to play on the wing which provides plenty of options for his coach.

David adds physicality to any backline as he is a strong running centre.

After spending 2 years with Bourgoin, he had represented the club on 30 occasions and scored 6 tries.

After making his debut for the France national side in 2008 against Italy, David accepted an offer to join fellow French side Toulouse.

David has been in and out of the French side since making his debuted and he was called into Guy Noves's Six Nations squad in 2017 ahead of the Six Nations. David went into the tournament with a single Six Nations cap that he picked up in 2008.

As of December 2019, he has made 18 appearances for the French club and has scored 5 points.