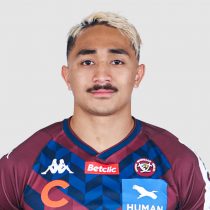 Having represented France at youth level, Yoram Moefana made his breakthrough in 2020 after a spell with the u20s the year before.

He broke into the Bordeaux senior team in 2020 and scored four tries in his first six appearances for the side.

A speedy centre with superb footwork, Moefana can play both inside and outside centre and has also appeared on the wing for Bordeaux.

His breakout season with Bordeaux earned him a test call up in November 2020.

He became the first French International born in the 2000s when he came off the bench in France's Autumn Nations Cup test against Italy.