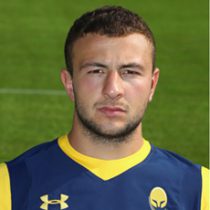 Zac Xiourouppa has progressed through the ranks at Warriors from the age of 14 and has gone on to captain the Under 18s.

The flanker has represented England at Under 16 level, while also captaining the Under 17s.

He made his senior debut in October that season in the European Challenge Cup, playing in Russia against Enisei-STM, and a week later featured against Brive at Sixways.

However, promoted to Worcester Warriors’ first-team set-up this summer, and having since gained match fitness playing in Wellington, New Zealand, he has arrived in Cornwall keen to make his mark and develop still further as a player.

In October 2018, he joined Cornish Pirates on dual-registration.