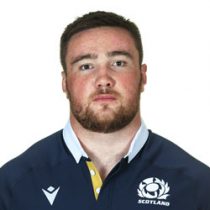 Fagerson is a product of the High School of Dundee and Strathallan and after coming through the Scottish Rugby Academy system signed his first professional contract with the Warriors in March 2015.

He was named part of Scotland's 2016 Six Nations squad and made his debut against England at Murrayfield as a replacement.

Fagerson was the fourth youngest prop in Scottish history to be capped for the country and, at the age of 20, became the youngest player to represent Scotland for more than half a century.

The tight-head prop made his Warriors debut in 2015 and went on to play 85 times for the club before signing a new deal that will keep him at Glasgow until at least 2022.

From the 2019-20 season Fagerson was named assistant coach at Glasgow High Kelvinside.

2020 saw him being named in Scotland's squad for the Six Nations tournament.

In May 2021, Fagerson gained selection for the 2021 British & Irish Lions tour to South Africa.