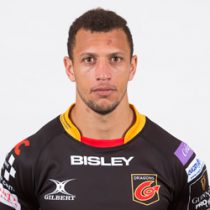 The South African joined Leinster in April 2013. Previously he played at fullback for the Bulls in Super Rugby and the Blue Bulls in the Currie Cup. He began his provincial rugby career with the Griquas, and made more than 50 appearances for the side between his Currie Cup debut in 2003 and his move to the Blue Bulls in 2007.

After his debut for the Blue Bulls in 2008, he went on to make 81 appearances and scored 105 points. He won the Currie Cup in 2009 and the Super Rugby Title in 2009 and 2010. Kirchner made his Springbok Test debut in the third Test against the British & Irish Lions in Johannesburg in July 2009 and became a regular starter before moving up north.

Zane continues to form part of coach Heyneke Meyer's set-up although only forming part of the extended squad for the 2015 Rugby Championship. Zane's experience and versatility combined with his blistering form for Leinster could prove to be vital at the World Cup.

Kirchner made 64 Currie Cup appearances whilst scoring 64 points. He made his debut for the Bulls in Super Rugby in 2008 making 81 appearances and scoring 105 points.

The versatile player won the Currie Cup in 2009 with the Blue Bulls as well as the Super Rugby title in 2009 and 2010 with the Bulls.

Dragons signed Kirchner for the 2017/18 season.

Kirchner has over 30 Springbok test caps having played fullback, wing and centre at the highest level. He has won 82 caps for Leinster scoring 11 tries in the process including a memorable two tries in the PRO12 Final in 2014 that Leinster won in the RDS against Glasgow Warriors.

In September 2018, he joined Bristol Bears on a one-month loan deal as injury cover from Pro14 side Dragons.