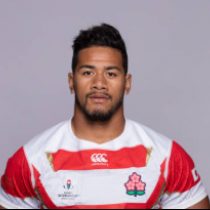 Moeakiola, originally from Tonga, he played for the Japan's U20 side at the World Rugby Under 20 Championship.

He gained major attention when he grabbed a spectacular hat-trick inside 30 minutes of a stunning performance against South Africa at the under-20 Rugby Championship in England.

In the end, the junior Springboks were too strong, lifting in the second half to claim a 59-19 win. However despite the score, Moeakiola captured the attention of the rugby world with his incredible performance.

Moeakiola signed for the Chiefs for the 2019 Super Rugby season and will look to make his debut in the competition.

He was named in the Japan squad for the 2019 Rugby World Cup and heads into the quarter finals of the tournament having made 4 caps.