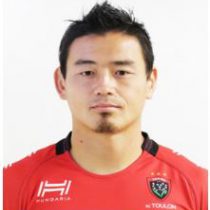 Now a cult hero in Japanese rugby, Ayumu Goromaru made his test debut while still a student at Waseda in a 24-18 loss to Uruguay in Montevideo before going on to becoming a regular under former Brave Blossoms and current England coach Eddie Jones.

When he debut for his country he was the second youngest player in Japanese rugby to play for the national team. Goromaru missed out on selection for the Brave Blossoms for nearly 4 years but on his return he became Japan's leading points scorer with over 50 caps.

Goromaru's distinctive goal-kicking stance — in which he clasps his hands together while lining up his kick — became a media talking point and was mimicked by young fans during the 2015 Rugby World Cup. "Goromaru-mania" even prompted fans to flock to see a Buddha statue said to be in a similar pose to the one Goromaru struck in his pre-kick routine.

During his test career Goromaru earned 57 caps for Japan and rocketed to stardom after scoring 24 points for Japan in their famous 34-32 victory over South Africa, dubbed the Miracle of Brighton, at the 2015 World Cup in England.

This lead to spells with the Reds in Australia and Toulon in France - both of which were marred by injuries. In June 2017, Goromaru re-joined Yamaha Jubilo for the 2017/18 after a lacklustre campaign with Toulon.

Goromaru fell out of favour in the Japanese squad when Jamie Joseph took over as head coach in December 2020, having missed out on the 2019 Rugby World, Goromaru announced that the 2021 TOP League season would be his final season as a professional.