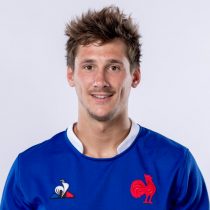 Serin is an electrifying attacking scrum-half, with a reliable kicking boot, that signed for Bordeaux since 2012, playing in over 120 games and scoring more than 400 points for the French side.

A member of the Parentis Sports Club before joining Bordeaux in 2009. His first team debut came as a sub at home to London Irish in the Challenge Cup in 2012, before making his Top14 debut at the close of that calendar year.

Serin represented France under 20's 19 times and contributed 109 points for the under 20's.

The following year he played in all five games for the grand slam winning team at the U20 Six Nations, scoring 44 points the four games in the JWC in NZ.

Serin debuted for the French senior national side against Argentina in November 2016 and made further headlines when he came off the bench for his first game against World champions, the All Blacks and created a try with a fantastic behind the back pass for Louis Picamoles for Frances only try of the game.

In June 2016, Serin was named into the France team to compete for the autumn tour in Argentina, he played two tests on the tour at scrum half. He came off the bench in all three autumn internationals.

Serin featured regularly for France in 2017 but was omitted for France's initial 2018 6 Nations squad. He was then called into the squad to cover for the injured Morgan Parra.

Serin had 16 test caps heading into the tournament.

He was then again named in the French squad for the 2020 Six Nation.