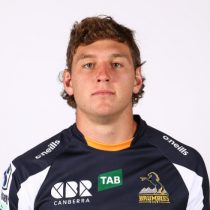 A product of Newington College in Sydney, Kuenzle is a versatile player who can also play in the inside centre position and is known as a direct ball-runner.

Kuenzle showed promise as a schoolboy and represented NSW at Schoolboy level in 2016 with his impressive efforts within the schoolboy series earning him selection in the Australian Schools Barbarians team in 2016.

His continued fine form at for NSW u20s earned Kuenzle further selections in 2017. He was named in the extended Junior Wallabies squad in 2018 and 2019.

Kuenzle is capable at either Flyhalf or Inside-Centre, is an excellent distributor, a young player who can really drive a team around the park with his passing and kicking game.

His form at youth level lead to him signing with the Canberra Vikings which saw him join the Brumbies as part of the Wider Training Squad for 2019 and beyond.

Despite not playing in his first season with the Brumbies, has already began to grow his reputation around ACT rugby circles with more than a couple of outstanding performances for the Brumbies Runners.

In 2020, he made his Super Rugby debut in round 2 against the Reds coming off the bench.