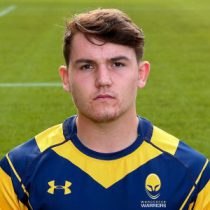 Joining Worcester Warriors Senior Academy in July 2017 was another progressive step for Beck Cutting, who was first involved with the club in 2014.

He has already played at three levels for England – U16, U17 and U18, having taken up the game with Kidderminster Carolians when he was eight years old. Beck was part of the England U18 squad that toured South Africa in August 2017.

Cutting featured for Worcester Warrior in the Anglo-Welsh Cup and was included in the England u20s squad for the 2017/18 season.

He also came off the bench in the European Challenge Cup match in Pau in December 2018 and the Premiership Rugby Cup match against Leicester Tigers at the start of the 2019/20 season.