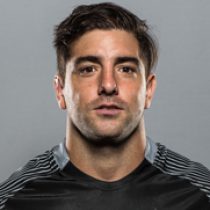 Agulla played for Hindú Club, in Argentina, from 2009 to 2011, winning the Nacional de Clubes in 2010. He also played at the same time for Pampas XV in South African Vodacom Cup.

In May 2016, the Argentinean back-line player announced that he had extended his stay at Newcastle Falcons by signing a new deal with the club.

In 2018, Agulla left the Falcons and joined Hindu Club, an Argentine sports club based in the Don Torcuato district of Greater Buenos Aires.