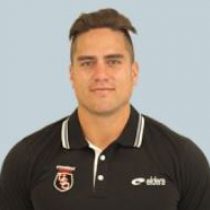 The Kiwi-born flyhalf-cum-centre has joined the Harlequins ranks for the 2012-13 season from New Zealand club North Harbour.

He is the son of All Blacks and Wigan Warriors rugby league legend Franco Botica. The ability to play at either 10 or 12 make Botica a very handy addition to the backline stocks.

He represented New Zealand at schoolboy level and did a stint with Pergigueux in France after narrowly missing out on selection to play Super Rugby for the Auckland Blues. He decided to return to France where he played the 2011-2012 Pro D2 season with CA Périgueux.

Late in the season, it was announced that he had signed a two-year contract with Harlequins, though he actually signed in October 2011. In 2016 Botica announced a move to Montpellier where he played Top 14 and Champions Cup rugby before joining Oyonnax, a Pro D2 side, early in 2017 as a medical joker