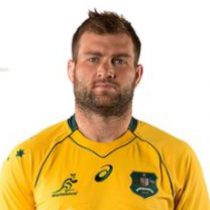 Hailing from Sydney, McCalman is fast earning a reputation as a quality member of the back row family.

Comfortable at six, 8 or even in the second row, McCalman's versatility has made him into a valuable player for any club. Having graduated from Kinross Wolarol School, McCalman moved on to Sydney University before becoming a member of the Western Force squad in 2010.

That same year he made his debut for the Wallabies and was a member of the Australian 2011 World Cup squad. The physical, no-nonsense back-rower has become a mainstay of the Force forward pack and has grown into a senior leader within squad.

In 2014, he crossed for four tries during the season and was again called upon for the Wallabies, where he played all three inbound Tests against France, before starting against Argentina and South Africa in the Rugby Championship.

While his Test season was disrupted by a shoulder injury, he return to secure his place on the Wallabies’ Spring Tour. He was selected as part of Australia's squad for the Rugby Championship and has managed to maintain his spot in the squad.

McCalman has scored 55 points in his 91 Super Rugby caps since his debut in 2010.

McCalman played only 21 minutes for the Western Force during the 2017 Super Rugby season scoring one try. He suffered thumb and shoulder injuries during the season and returned to action in October during the 2017 NRC.

After 2 appearances with Perth Spirit McCalman was named in the Wallaby squad to face the Barbarians.