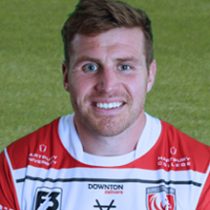 Morgan made his debut for England on 4 February 2012, coming on as a second-half replacement against Scotland in the 2012 Six Nations Championship. He played in all five of the six nations games, receiving the man of the match award in the final match against Ireland.

On 4 March 2012, Morgan signed for his boyhood club Gloucester Rugby from the Scarlets.