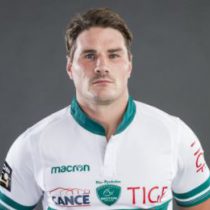 Mowen was born in Brisbane and educated at Villanova College. He was played for the Brisbane Easts club, and captained the Queensland under 19s.

At the 2005 Under 21 Rugby World Championship he captained Australia to finish second.

A hard-working, big forward who can feature in any jersey numbered 4 to 8, Mowen’s leadership skills were vital in guiding one of the most inexperienced Brumbies sides ever assembled through the 2012 season.

After playing 42 games for the Waratahs, Mowen made a seamless transition to the Brumbies and was quickly identified by Jake White as a leader of the group.

Having sharpened his captaincy skills while on tour with the Waratahs and as an Australian Under 21 representative, Mowen made the perfect fit for skipper of a new team with plenty to prove.

Clocking up 50 Super Rugby caps while on tour in South Africa with the Brumbies was a just reward for Mowen who reached his half century without missing a single game.

Mowen announced his departure from Australian rugby at the end of the 2014 Super Rugby season going on to sign for Montpellier in the Top 14 in France.

Mowen signed for Pau for the 2015-16 season and was included as one of four overseas players for a clash against the French Barbarians in November 2016.

In May 2019, he announced his exit at Pau Rugby Club in order to seek a club at the federal level near Pau, France.