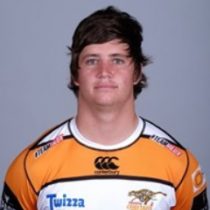 He was included in the South Africa U20 squad but failed to make the final squad for the 2016 Junior World Cup.

He was called into the squad as an injury replacement for their final match in the tournament.

Later that year he made his first class debut for the Sharks in the Currie Cup qualifiers and was named in the Sharks 2017 Super Rugby squad.

He made his Super Rugby debut against the Southern Kings later in the competition.

He made 2 other appearances for the Sharks before joining the Kings on loan for the 2017/18 PRO14 season and made his debut in the competition against Edinburgh.

He has since moved to the Cheetahs and represents the side in the PRO14 and Currie Cup.