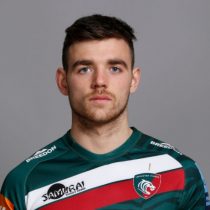 Scrum-half Ben White became the youngest player in Leicester Tigers’ Premiership history when he came off the bench in the closing stages of the home win over Harlequins in September 2016, aged just 17 years and 151 days, he is the second-youngest player to ever play in Premiership Rugby - behind David Doherty of Leeds.

The previous mark had been set by fellow scrum-half Ben Youngs who has gone on to top 200 games for the club as well as starring with England and the Lions. Staffordshire born, Ben studied at Denstone College and then Leicester Grammar School, gaining selection for Midlands Under-16s and England at Under-16A and Under-17 level.

As an academy player, he made an appearance against Argentina in Marcos Ayerza’s testimonial fixture at Welford Road in the build-up to the 2015 World Cup and led Tigers in the Premiership Sevens the following summer.

As well as gaining senior experience with Doncaster in the Championship during 2016/17, White played in the Anglo-Welsh Cup semi-final and final wins for Tigers.

He remained around the senior squad for 2017/18, a campaign which saw him captain England in the Under-20s Six Nations – including a win over Wales who were captained by his housemate Tommy Reffell – and then joined the national squad for the World Under-20s Championship in France where he played in every game including the Final.

By 2018/19, he had established himself in the seniors despite still being a member of the development squad, and made 25 first-team appearances in a campaign which ended with a run-out at Twickenham as part of an England XV against the Barbarians.

After 70 appearances for the Leicester Tigers, White left the club at the end of the 2020/21 season.