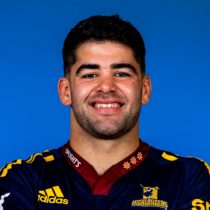 A Canterbury academy graduate, Billy Harmon is a furious tackling flanker with an impressive work ethic.

Harmon attended St Bede's College in Christchurch and during that time, he was selected as a member of the New Zealand Schools Barbarians squad for their matches against Australia and Samoa in 2012.

After leaving school, Harmon started playing for New Brighton in club rugby while working full-time as a plumber.

His excellent form during the 2016 club rugby season, captaining New Brighton to the final of the Hawkins Division 1 Trophy.

His impressive club form didn't go unnoticed as he was named in Canterbury's squad for the 2016 Mitre 10 Cup.

He debuted in the first match of the season, a 43-3 victory over Auckland and went on to make 7 appearances and score 3 tries during the campaign which culminated in Canterbury lifting the Premiership title for the 8th time in 9 seasons as well as claiming the Ranfurly Shield.

Harmon was included in the Canterbury squad for the 2017 Mitre 10 Cup and helped the side to yet another Premiership final.

His form during the 2017 season lead to his first Super Rugby contract with the Crusaders where he linked back up with Scott Robinson who gave him his NPC debut in 2016.

In 2018, Harmon earned a place in the Maori All Blacks squad and he now has three caps to his name.

Harmon earned 4 Super Rugby caps for the Crusaders in his first season with the club helping the side win the Super Rugby title and after 3 appearances in the opening three rounds of 2019 he penned a new deal for the 2020 Super Rugby season.