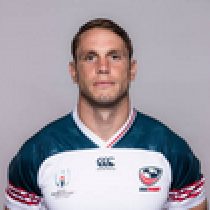 Scully is an established international having made over 20 appearances for his country and featured in the 2011 Rugby World Cup for the Eagles where he played in all four matches.

He joined Leicester Tigers on a trial basis in 2013 and earned an extended contract after his eye-catching performances. After spending two seasons with the Leicester Tigers, Scully signed for the Cardiff Blues.

In January 2017, he was named in the USA team ahead of the 2017 Americas Rugby Championship. After making 35 appearances for Cardiff, Scully was handed a new long-term contract to remain in the Welsh capital.

Scully captained USA at the Rugby World Cup in Japan became a cult hero during his time at the Welsh capital.

Scully departed Cardiff Blues in the summer of 2019 after four seasons at Cardiff Arms Park, where he made 52 appearances.

The American enjoyed a number of memorable moments in Cardiff Blues colours, including a dramatic late try in the Challenge Cup final victory in Bilbao in 2018 and his acrobatic score in the home derby clash against Scarlets, which was voted Try of the Season in 2016/17.

Scully, who also played for Leicester Tigers, won 54 caps for the USA national side, having made his debut against Russia in 2011, and played in three Rugby World Cup campaigns.

He was appointed as USA captain in 2016, racking up an impressive 60 per cent winning record as skipper.

In March 2020, he announced that he is hanging up his boots after a decade of playing at the highest level of the game.