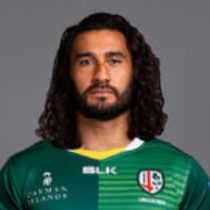 Born in Wellington, New Zealand, Cowan is a dynamic member of the pack who plies his trade in the backrow.

His professional career began with Cornish Pirates in England before linking up with Worcester Warriors. In the summer of 2013, it was announced that Cowan would join London Irish.

After earning Scottish citizenship he made his debut for Scotland in June 2014 when he lined out against USA.

Cowan was initially not selected into Scotland's 31 man squad for the World Cup but due to an injury to Grant Gilchrist, he was called in as his replacement.

Blair was one of the standout players during the 2016/17 season, chipping in with six tries to help Irish win promotion back to the Premiership.

In October 2017, he signed a new undisclosed deal with London Irish. Cowan has been a pivotal figure in the Exiles’ back row since his move to the club in 2013.

In March 2018, London Irish confirmed that Cowan will join Saracens on loan as cover for their injury crisis.

In April 2018 London Irish recalled Cowan from loan after they had an injury crisis of their own.

After 153 appearances in 8 years at London Irish, Cowan left the club to pursue a new challenge in Japan.