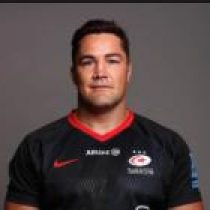 A cornerstone of Saracens' squad since 2008 having joined the side from the Sharks in the Durban. A hotly contest midfield in South Africa saw Barritt make the most of his English passport and became an intregal part of Saracens and England's midfield.

He was named the Saracens’ Player of the Season Award in just his second season, the 2009/10 season.

His ferocious tackling and strong ball carrying are a trademark of his game while he also straightens the line beautifully. Having missed out on the initial Lions squad in 2013, the abrasive centre was called up as backline cover midway through the tour. Barritt missed the start of the 2013/14 season through an ankle injury and has lost his starting place in the England side with the emergence of Luther Burrell and Billy Twelvetrees in the midfield.

Stepping up to assume the captaincy after deputising for Alistair Hargreaves on a number of occasions, Barritt took on the role on a permanent basis from the 2016/17 season onwards, leading the team to a Champions Cup title defence in the process.

Two Premiership winners’ medals and a further Heineken Champions Cup have followed under his leadership with the latter accolade coming in a man-of-the-match display against Leinster in May 2019.

After helping Saracens reclaim the Premiership title during the 2017/18 season, Barritt signed a new deal with the club which would see him remain at the club for the 2018/19 & 2019/2020 seasons.