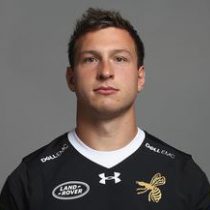 A former member of the academy system at Irish provincial side Leinster, Macken made his debut for the senior side in 2010. Macken has also represented Ireland at several underage levels including 13 caps for the Under 20 side.

Macken joined Gloucester on loan for the second half of the season in 2014/15 and helped the English side to the Challenge Cup.

In May 2015, Leinster announced that he would be leaving the Pro12 side to join Premiership side Wasps, he joined Wasps ahead of the 2015/16 season, adding another exciting option in the midfield.