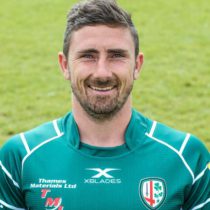 Born in the Scottish coastal town of Irvine, approximately 25 miles southwest of Glasgow, McKibbin moved to Australia with his family when he was three years old and grew up in Brisbane.

Having first played rugby at John Eales's old school, Marist Brothers Ashgrove, his first representative honours came as an open-side flanker, a position he played for Queensland Schoolboys and the state’s Under-19s, before later switching to halfback when it became apparent that the position would be better suited to his smaller adult stature.

Playing for the Ballymore Tornadoes in the 2007 Mazda Australian Rugby Championship, McKibbin made his Super Rugby debut for Queensland out of the Reds Academy in 2009.

After four Super Rugby games, McKibbin moved to Sydney in 2009 to take up an opportunity with the HSBC Junior Waratahs, playing his club rugby for Eastern Suburbs.

As the Shute Shield’s standout player, he won the 2010 Ken Catchpole Medal for the most outstanding player in the Sydney club rugby competition just two years after winning the equivalent award in Brisbane, making him the only player to achieve such a feat.

Brendan has signed for Greene King Championship team London Irish from the 2016/17 season on a 2 year deal.

Brendan scooped a series of Man of the Match accolades during the 2016/17 Championship winning season. Touching down eight times during that campaign, McKibbin has proved himself as a vital part of the Exiles’ squad.