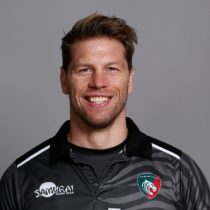 Leicester-born Brett Deacon made 135 first-team appearances in two spells with Tigers before joining the coaching staff.

A hooker at junior levels before moving to the back row, he captained England Under-19s during 2001/02 and then partnered older brother Louis at lock on his senior debut for Tigers in 2003, becoming only the second pair of brothers to do so, following Mark and Paul Grant in 1994.

After graduating from the academy, he spent six seasons in the senior squad, making more than 120 appearances.

He was included in the matchday squad for Finals of the Premiership, Anglo-Welsh Cup and European Cup in the historic 2006/07 season, then captained Tigers against the Classic All Blacks in 2008 and started the win over world champions South Africa.

Brett then had two seasons with Gloucester – and captained them at Welford Road – before returning to his hometown club in 2012/13 and continued to play an important part before announcing his retirement at the end of that year.

He took up a coaching role with the academy and development squad, then focused on defence with the senior squad from the second half of the 2016/17 season following the departure of director of rugby Richard Cockerill and has since worked with forwards and the breakdown area throughout the club.