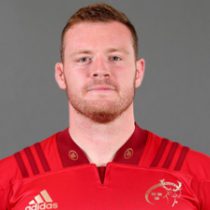 Scott played rugby at the Dolphin RFC, before moving to Highfield R.F.C. and then Youghal RFC. He played both Junior and Senior Cup rugby for Presentation Brothers College and winning it in 2010.

He was capped in 2012/13 by the Ireland U20′s and joined Dolphin from UCC in the 2014 season and played for Munster A the following season.

Brian then made his competitive debut for Munster when he came on as a substitute against Scarlets in the sides opening 2016/17 Pro12 fixture.

Scott landed a professional contract with Munster, and got promoted to the first team. Scott signed a two-year full contract for the start of the 2018/19 season.

However, in May 2020 Scott announced his retirement with immediate effect. The tighthead prop made 13 appearances for Munster since joining from Sale Sharks in 2017 and is set to make the move into coaching.