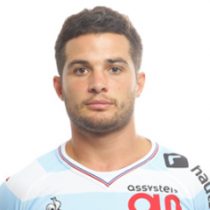 Dulin is well known for his versatility in the backline, as well as his searing pace and eye for a gap. He was a member of the Castres team that won the Top 14 in 2013 having begun his career at Agen, making his professional debut in 2009.

The gifted fullback remained at Agen until the end of the 2011/12 season before moving to Castres having played over 60 times for the club.

His move to Castres came off the back of a test call up for Les Bleus and made his test debut during their tour of Argentina in 2012.

A move to Paris followed in 2014 as he joined Racing 92. He continued fine form saw him retain his place in the France test squad as he was named in the squad for the 2015 Rugby World Cup in England.

Dulin earned his 29th test cap for France during their 2017 tour to South Africa,