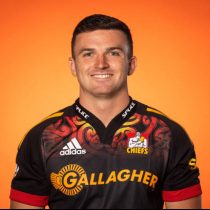 Born and bred in Hamilton, Gatland is a talented flyhalf from Hamilton Boys’ High School who went on to debut for Waikato in the ITM Cup in 2015 before spending several years in Waikato.

He was part of the Blues development side during the 2016 Super Rugby season, returning to the city of sails where he previously played for a Blues Schools side back in 2013. Gatland is the son of kiwi-born for Wales and British & Irish Lions coach, Warren Gatland.

Joining North Harbour in the 2016 season from Waikato, he helped North Harbour win the Mitre 10 Cup Premiership title with a late drop goal against Otago in Dunedin. In 2016 he was called into the Crusaders squad as temporary injury cover when Richie Mo’unga broke his hand.

Gatland was called into the Blues squad early in the 2017 Super Rugby season as injury cover for Piers Francis and Ihaia West and he made his Super Rugby debut against the Hurricanes for the Blues in 2017. Gatland faced his father's side, the British and Irish Lions, when he represented the Provincial Barbarians side against the Lions in their tour opener in Whangarei on June 3.

Following impressive performances for the Blues and for Provincial Barbarians Gatland signed a one-year deal for the 2018 Super Rugby competition. Following two seasons with the Blues, Gatland headed south to the Highlanders on a two-year deal to replace Lima Sopoaga, who left for the U.K.

Gatland's first season with the Highlanders was cut short after he broke his leg against the Sunwolves. He returned in late 2020 and came off the bench to slot a drop goal in the Highlanders' 28-27 Super Rugby Aotearoa victory over the Chiefs, who Bryn's father Warren was coaching at the time.

He played three other games for the Highlanders in 2020 before he signed with the Chiefs on a three-year deal until the end of the 2023 season. Gatland had an impressive 2020 Mitre 10 Cup campaign with North Harbour, finishing as the competition’s leading points scorer with 119 points.