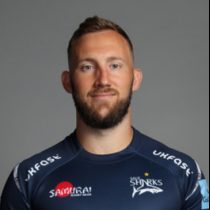 McGuigan was brought into the Scotstoun fold after impressing for Scotland 7s in the 2011/12 HSBC Sevens World Series, where he weighed in with five tries in his first two tournaments.

He learned to play primarily as a centre but McGuigan is equally at home in the back three positions, and is a product of the prestigious Western Province academy. He previously played for Border Bulldogs. Born in Namibia, he qualifies for Scotland courtesy of his Glaswegian mother.

On July 27th, 2016, the Namibian-born back signed for Sale Sharks on a two-year deal from Exeter Chiefs.

In October 2017, McGuigan was named in the Scotland squad for the 2017 Autumn Tests, having previously won a Scotland A cap in 2014.

He added to his 2 caps for Scotland as he was named in the squad to compete at the 2018 Six Nations.

2020 saw him being included in the squad that would compete at the Six Nations.