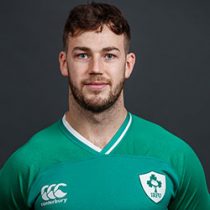 The former Blackrock College No.8 is already creating a storm. Doris' power and running put him next in an impressive line of No. 8's in the Leinster production.

Doris started all five games during the 2017 U20 Six Nations when playing a year young at that age level and featured at the 2017 U20 World Championship in Georgia.

The Ballina native is played his club rugby with St. Mary's College & and missed the entirety of the 2018 U20 Six Nations Championship through injury.

In May 2018, after making his first senior appearance for Leinster against Connacht in the Pro 14, Doris was upgraded from an Academy contract to senior status for the 2018-19 season. Just a few weeks later, he was named to captain Ireland U20 side at the World Rugby U20 Championships in France.