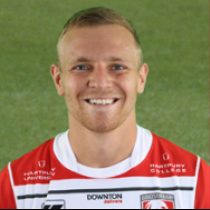 Braley helped Gloucester lift the Premiership Rugby 7s in 2014, skippering both the United and 7s teams and scoring memorable tries against Saracens and Benetton Treviso.

Callum joined Gloucester Rugby in the summer of 2014 from Bristol Rugby.

Played his early rugby with St Mary's Old Boys, but made his name locally when a student at Hartpury College.

Has been an England age group international from U16 level upwards and skippered the successful defence of England U20s Junior World Championship in June 2014.

A skilful scrum half, he provides competition and strength in depth at half back.

After 33 senior appearances for the Cherry and Whites, he penned a new deal to remain with the club until at least the 2017/18 season.

Braley was called into Italy's Six Nations squad during the 2019 edition of the competition, he didn't make his test debut for side but was included in their squad to prepare for the World Cup.

He gained his first senior international caps for Italy off the bench against Ireland and Russia in World Cup warm-up matches. Italy's final warm-up match gave him his first start against England.

The scrumhalf was part of the Italy squad for the 2019 Rugby World Cup, and the 2020 Six Nations Championship.

Callum would be moving to join Italian side Benetton Rugby at the end of the 2019-20 season.