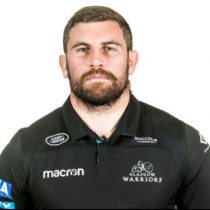 Gibbins moved to Palmerston North in 2007 to study for a Bachelor of Sport and Exercise at Massey University and made his Manawatu Turbos debut in 2009 against Wellington.

He was named in the Hurricanes Wider Training Group for the 2013 Super Rugby season.

In 2015, Gibbins signed a full contract to be in the Hurricanes first team squad after two years in the Wider Training Group.

He then extended his Hurricanes contract to the end of the 2016 season.

Gibbins was the captain of Manawatu Turbos, where he played under incoming Glasgow Warriors coaches Dave Rennie and Jason O’Halloran, and he has scored 19 tries in 60 appearances for the Mitre 10 Cup side.

He was a Super Rugby winner with the Hurricanes playing 26 times in Super Rugby and scoring three tries before he signed with Glasgow ahead of the 2017/18 season.

He signed a three-year contract keeping him at Scotstoun until at least May 2020.

Gibbins made an immediate impact at Scotstoun in 2017/18, the hard-tackling flanker made 15 appearances across all competitions in his debut season, scoring six tries in the process as he quickly established himself as a fan favourite.

His leadership qualities were a valuable asset to the squad, a fact that saw him being named as one of the club's co-captains for the 2018/19 season.

The flanker was a prominent figure in the squad’s march to the 2019 PRO14 Final, before leading out the Warriors in the competition’s showpiece event at Celtic Park.

In May 2020, Glasgow confirmed that Gibbins would leave the club after a total of 46 appearances to date including 44 starts, crossing the whitewash on 13 occasions.