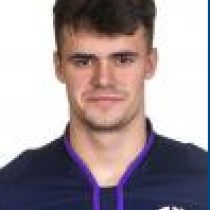 Cameron Anderson joined Wasps’ Senior Academy in the summer of 2018.
Anderson made all 10 appearances in the 2018/2019 Premiership Rugby Shield matches. He made a number of impressive performances and provided a number of assists.
The utility back had a loan spell at the Loughborough Students in 2018/2019.
Anderson was a called up to the Scotland U20 team in 2019, where he was involved in the Under 20s’ Six Nations and World Rugby Under 20 Championship campaigns.