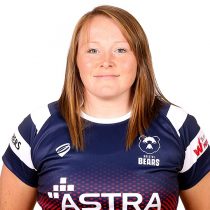 Caryl has played for Bath Bucaneers hockey team and has previously represented South West Wales in the code.

She is employed by Bath Rugby as a Community Foundation & Inclusion Coach.

Dominant in the scrum and a strong ball carrier, Thomas signed a new deal with the Bristol Bears Women in June 2020.