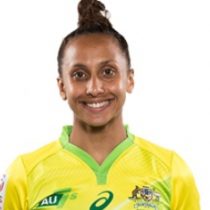 Staples went from internet sensation to International Women's Sevens star in 2017, with the netball convert debuting in Langford, Canada, only six months after first training in the Australian Women's Sevens framework. One of the new range of converts to Rugby, her netball background has held her in good stead with her core strength and agility being one of her many assets on the paddock.

Staples made her debut for Australia at the Langford Sevens in Canada where she barnstormed onto the international scene with five tries. The exciting try scoring machine continued this form in Clermont-Ferrand in France as she continued to show the World circuit what she is capable of with ball in hand.

She has been included in the Womens squad for the 2018 Rugby World Cup Sevens.