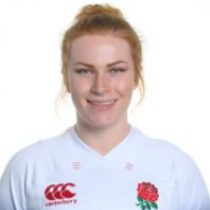 The potential of Catherine O'Donnell was spotted at the age of 18 when she represented England U20 while playing for Firwood Waterloo.

Her first experience of rugby was actually in rugby league, when she went down to local club Maryport ARLFC while she has also spent time at Keswick, Vale of Lune.

She then played for the University of Liverpool while she was studying, where she was named their athlete of the year for the 2015/16 season.

Catherine now combines playing for Loughborough Lightning with studying for a Masters degree in Business Psychology at Loughborough University, where her performances earned her a first England cap against Canada in November 2017.

Her first experience of the Women's Six Nations came in February 2018 when she was a second-row replacement for the Red Roses against Scotland and Ireland. She scored her first international try in England’s 37-15 win over Ireland at Twickenham Stadium in the 2018 Quilter Internationals.

After being awarded a full-time England contract in 2019, Cathering started in four of England’s five Women’s Six Nations games as they won the Grand Slam scoring against Ireland and Wales, as well as the final try in the 80-0 rout of Scotland at Twickenham in the final match.

Following the conclusion of the 2019 season, she has 13 test caps.