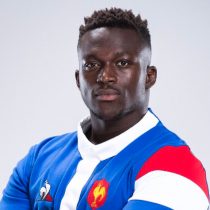 Born in West Africa's Guinea-Bissau, Gomes Sa entered the Racing 92 Academy system in 2011 and signed his first professional deal with the club in 2015.

In November 2017, Cedate earned himself a call-up to the French Barbarians squad to face the Maori All Blacks and also played in an exhibition match against the All Blacks at the Groupama Stadium for the French XV.

He has become a mainstay in the Racing 92 match-day squad & appeared on 16 occasions during the 2016-17 season.

In January 2018, Brunel selected Gomes Sa in his Six Nations squad for the 2018 edition of the tournament. He made his debut against Ireland coming on as a sub for Rabah Slimani in the opening round defeat in Paris.